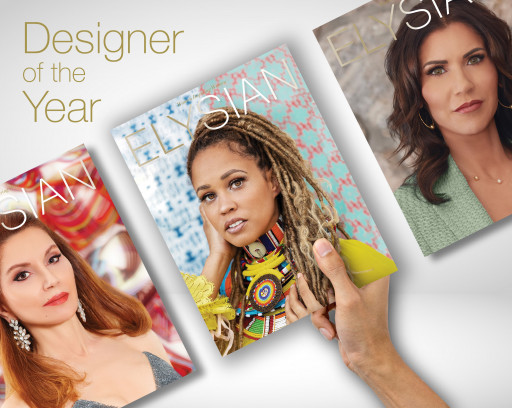 
ELYSIAN, an international luxury lifestyle magazine created to inspire and reflect the interests of women over 40, will see its creator-in-chief, Ryan Stalvey, recognized as Designer of the Year as part of the 2022 Folio: Eddie & Ozzie Awards.

ELYSIAN Executive Editor Laurie Bogart Wiles is a finalist for an Eddie in Range of Work by a Single Author for the magazine's Spring 2022 issue. In addition to Designer of the Year, Stalvey is a finalist for an Ozzie for Overall Art Direction - Consumer/Custom Content Marketing for the magazine's Winter 2021/22, Spring 2022, and Summer 2022 issues. Wiles and Stalvey have already been named honorable mention in these categories, which include entries from some of the world's largest publishing houses, such as Meredith and Hearst.

This prestigious recognition program in the publishing industry acknowledges excellence in editorial content and design across print and digital media. A panel of judges reviewed more than 1,300 entries across 170 categories. Winners will be announced live at an awards gala on Sept. 13 at the City Winery in New York.

"ELYSIAN was built upon an idea, a word, a paragraph, an article that developed into a magazine and expanded into a multimedia ecosystem. To have Ryan Stalvey named 2022 Designer of the Year is an honor we are immensely proud of," ELYSIAN Publisher Karen Floyd said. "And to have ELYSIAN recognized by the Eddie & Ozzie awards for the third time in as many years is a testament to the talent and determination of our staff and the strength of our brand and readership."

The coveted Eddie & Ozzie Awards are to magazines and online publishing what the Academy Awards are to the motion picture industry. ELYSIAN enters each year as a David in a field of Goliaths.

"Being recognized as part of the 2022 Folio: Eddie & Ozzie Awards is confirmation from your peers that your work stands out above the rest. It is a validation to ELYSIAN that our vision has value," Stalvey said.

ELYSIAN launched in 2015 and has evolved into a comprehensive multimedia brand that includes print, digital, film, podcasting, social media, and commerce.

ELYSIAN'S mantra, "Women Inspiring Women" reflects Floyd's insightful and revealing magazine and video interviews of hundreds of accomplished professional women who are leaders in their respective fields. ELYSIAN has carved out a market niche as the only magazine and brand to identify women over 40, and as a result of its success is expanding its digital platform to include television content on Apple TV, Roku, ElysianTV.com and our upcoming app.