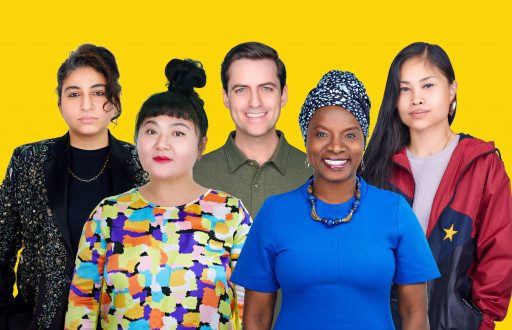 The Vilcek Prizes in Music

The 2023 Vilcek Prizes in Music are awarded to Du Yun and Angélique Kidjo. Vilcek Foundation Cofounder, Vice Chair, and Secretary Marica Vilcek elaborated on the decision to award two prizes.

"With the 2023 Vilcek Prizes in Music, it was important to us to recognize a range of musicians: from those in the halls of classical music to the songwriters and performers whose music vibrates across the airwaves around the world," said Vilcek. "Music transcends language, borders, and boundaries. Du Yun and Angélique Kidjo's work exemplify this, from Du Yun's arresting operas and electrifying postmodern compositions to Kidjo's charismatic presence on the global stage over the past four decades."

Vilcek Foundation President Rick Kinsel shared similar sentiments. "The sheer scope of Du Yun's and Angélique Kidjo's work defies any easy categorization," he said. "Du Yun's virtuosic range is evidenced from her operas to her avant-garde projects like Shark in You and A Cockroach's Tarantella—her work bridges sound art and classical composition. Kidjo's prolific songwriting, albums, and collaborations have brought African music to the mainstream, while also introducing generations of listeners to Afropop, Afrobeat, and traditional West African music." He continued, "Both artists' respective influence exemplifies the broad impact immigrants have on culture and society."

Du Yun receives the Vilcek Prize in Music for her open approach to composition, which subverts the boundaries of traditional classical music by incorporating influences from punk, electronic, and experimental music, and for the virtuosity of her Pulitzer Prize-winning opera, Angel's Bone.

Born in Shanghai, China, Du Yun began studying piano at the age of four and began attending the Preparatory Divisions of the Shanghai Conservatory of Music at age six. She came to the United States to pursue higher education in music, earning her bachelor's at Oberlin Conservatory and her Ph.D. in Music Composition at Harvard University. In 2001, Du Yun co-founded the International Contemporary Ensemble with the goal of advancing the genre of experimental music through collaborations, commissions, and performances.

Angélique Kidjo receives the Vilcek Prize in Music in recognition of her exceptional range as a singer-songwriter and for bringing African music to the global stage through her performances, albums, and collaborations. Born in Ouidah, Benin, Kidjo made her musical debut with the album Pretty in 1981. She rose to international fame in the 1990s with albums like Logozo, Ayé, and Fifa. In 1997, Kidjo immigrated to the United States, moving to Brooklyn, New York. Since then, she has continued to write, record, and tour extensively, while undertaking humanitarian work as an international Goodwill Ambassador for UNICEF and with the Batonga Foundation, which she founded in 2006.

The Vilcek Prizes for Creative Promise in Music

The Vilcek Prizes for Creative Promise in Music are awarded to early- and mid-career immigrant musicians, composers, and music producers living and working in the United States. Recipients are selected for the professional and creative quality of their work: musical compositions and performances that represent important contributions to their genres, and that resonate and inspire both performers and audiences.

The Vilcek Prizes for Creative Promise in Music are awarded to Arooj Aftab, Juan Pablo Contreras, and Ruby Ibarra.

Arooj Aftab receives the Vilcek Prize for Creative Promise in Music for her evocative songs and compositions that incorporate a range of influences from semi-classical Pakistani music and Urdu poetry, to jazz harmonies and experimental music. Her blend of ancient traditions and contemporary style has earned her mainstream recognition, including a 2022 Grammy nomination for Best New Artist, and a 2022 Grammy for Best Global Performance for Mohabbat. Born in Saudi Arabia to Pakistani parents, Aftab found music as an outlet for self-identification and discovery. She immigrated to the United States in 2005 to pursue studies in music composition and engineering at the Berklee College of Music.

Juan Pablo Contreras receives the Vilcek Prize for Creative Promise in Music for his work as a composer and conductor of orchestral music that draws on his Mexican heritage, and for his leadership in founding the Orquesta Latino Mexicana. Contreras' compositions tell stories about Mexico from an immigrant perspective. A dedicated teacher and mentor, Contreras seeks to empower the next generation of musicians and to foster equity and inclusion in orchestral programming and seeks to expand classical music curriculum beyond its traditionally Eurocentric focus. Born in Guadalajara, Mexico, Contreras immigrated to the United States in 2006. He holds degrees from the California Institute of the Arts (BFA), the Manhattan School of Music (MM), and the University of Southern California (DMA).

Ruby Ibarra receives the Vilcek Prize for Creative Promise in Music for her personal and evocative hip-hop and spoken word performances that center her experiences as a Filipina American woman, and as an immigrant growing up in the San Francisco Bay Area. Born in Tacloban City in the Philippines, Ibarra immigrated to the United States with her family in 1991. Her debut mixtape, Lost in Translation, and her 2017 album, CIRCA91, explore themes including immigration, colorism, and misogyny. In addition to her music, Ibarra is a dedicated activist, and in 2018 she founded the Pinays Rising Scholarship program.

The Vilcek Foundation raises awareness of immigrant contributions in the United States and fosters appreciation for the arts and sciences. The foundation was established in 2000 by Jan and Marica Vilcek, immigrants from the former Czechoslovakia. The mission of the foundation was inspired by the couple's respective careers in biomedical science and art history. Since 2000, the foundation has awarded over $7 million in prizes to foreign-born individuals and has supported organizations with over $5.8 million in grants.